Over the last few days, I've come across a couple of blog posts that featured fresh attempts at a formal Christian statement of belief. In one case, as I recall, it was a certain congregation's faith statement or mission statement or something like that. The other item was described as an emergent-church creed.

Two things struck me about them both. First, they were stated so very well, even beautifully. Second, they had the following in common:

No Abraham. No Israel. No Moses. No Exodus. No David. No Son of David. No Prophets. You get the idea. In these statements, it's as though the first advent of Christ was the genesis of this way called Christianity.

So I was thinking that I should say something like, "Guys, Jesus stood in a tradition! He was the fulfillment of an ancient hope! And all of that's at the center of Chrisitianity. "

So then I was thinking, Since that sort of language is all over the New Testament, and since it is integral to the faith that was once for all delivered to the people of God, then why not include it in what Christians say about themselves and the call that the Holy One of Israel has issued to them in Jesus the Messiah? I mean, grafted-on branches shouldn't talk as though they're the tree. To do so is to be theologically out on a limb and historically nuts.

But then I asked myself . . . . On Mars Hill, how many Hebrew Scriptures? Hmm. None. Only pagan poets. Oh, and then there's Philippians and 1st Thessalonians and 2nd Thessalonians, none of which, apparently, contains a reference to the Old Testament. If you find one in there, let me know.

So I decided (and, yes, this is an overly-simple way of putting it), While we Christians are trying to initially reach and teach others, no they don't have to know about Abraham like they have to know about Jesus. But on the other hand, as they grow, we'd be robbing them of their birthright if we didn't teach them the first 78% of the Christian Canon.

P.S. This post has been hanging around as a draft for several days, so I'm sending it out now asking, What do you think?
Posted by Frank Bellizzi at 7:15 AM 7 comments:

Okay, about last week . . . My kids being out of school for Spring vacation, and beautiful weather in Connecticut, plus anything else that can make this excuse sound legitimate, conspired to keep me from blogging. (Thanks, Steve and Dee, for checking in and asking around).

Some weeks the only thing I post is Monday's prayer. But last week, I didn't do even that. And get this: the Sunday before, I preached a sermon about . . . prayer.

Anyway, now ready to get with it, I'm praying with Augustine,

We thank you, Lord, in the name of Christ your Son, Amen.
Posted by Frank Bellizzi at 8:34 AM 1 comment:

Email ThisBlogThis!Share to TwitterShare to FacebookShare to Pinterest
Labels: Prayer to Start the Week

In you we live and move and have our being. You have made us for yourself, so our souls are restless until they rest in you.

Grant us purity of heart and strength of purpose, that no selfish passion may hinder us from knowing your will, and no weakness from doing it.

Through Christ the Lord, Amen.
Posted by Frank Bellizzi at 11:08 AM 2 comments:

Email ThisBlogThis!Share to TwitterShare to FacebookShare to Pinterest
Labels: Prayer to Start the Week 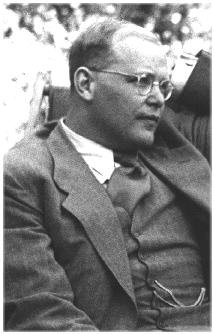 Posted by Frank Bellizzi at 6:26 AM No comments:

Email ThisBlogThis!Share to TwitterShare to FacebookShare to Pinterest
Labels: Bonhoeffer

Over the past several weeks, a few of the posts here have been about Dietrich Bonhoeffer.

At the time, I was gearing up and getting my head together for an article that appears in this month's (April 2005) Christian Chronicle. You can see the article here.
Posted by Frank Bellizzi at 5:16 PM 3 comments:

Email ThisBlogThis!Share to TwitterShare to FacebookShare to Pinterest
Labels: Bonhoeffer

"Therefore, since we have a great high priest who has gone through the heavens, Jesus the Son of God, let us hold firmly to the faith we profess. For we do not have a high priest who is unable to sympathize with our weaknesses, but we have one who has been tempted in every way, just as we are--yet without sin. Let us then approach the throne of grace with confidence, so that we may receive mercy and find grace to help us in our time of need." -Hebrews 4:14-16

You are a such a great and incredible God. My mind could never have come close to even conceiving of you. Yet, you have chosen to reveal yourself to me. What little I've been willing and able to take in thrills and delights, convicts and humbles me. I want and need all of that, and you deserve the devotion of my heart. So grant that I will see and know more of you.

God, please forgive me, because I know that so much of me is not consistent with these best desires of my heart. So make me pure and sincere and true. Help me to be a living sacrifice, something that you will find holy and acceptable.

I ask this knowing that you love me and that you will, because of Christ, change me and give to me what I need today. And so I ask you to receive my thanks and to grant me many blessings through his name, Amen.
Posted by Frank Bellizzi at 8:27 AM No comments: