Born in Boston in 1706, Shubal Stearns lies buried more than 600 miles to the south and west, in the little town of Staley, North Carolina. Between those two places--at Tolland, Connecticut--Stearns underwent a spiritual transformation. The changes he embraced in Tolland led him to lay part of the foundation of a well-known feature of our modern American religious landscape: the Bible-Belt South.

The Stearns family moved from Boston to Tolland in 1715, when Shubal was still just a boy. An active member of the Congregational church, in 1727 he married a local girl, Sarah Johnson. Years later, his life forever changed with the coming of what we now call the First Great Awakening.

By the 1730s, Puritan churches seemed stale and formalistic. Preachers of the Great Awakening challenged the status quo with emotional sermons that called hearers to a vibrant, all-consuming faith. Stearns heard the most famous evangelist of them all, George Whitefield, when he preached in Connecticut in 1745. Immediately, Stearns identified himself as a New Light, someone who welcomed the message of the revivalists. Even more, he sided with the Separates, radical New Lights who felt they could no longer be members of their spiritually cold and lifeless congregations.

With no church facilities, Separates had to decide where they would gather for worship. In Tolland, they met in the Stearns home on Charter Road. Stearns himself served as minister of the congregation, which grew through the years. But in 1751, the group divided. Some, like Stearns and his family, embraced the Baptist teaching that church membership is only for those who have experienced believers' baptism, adult immersion upon a profession of Christian faith. Soon after he was immersed, Stearns organized a "Separate Baptist" church in Tolland.
﻿
Weather permitting, people would sometimes gather at Pulpit Rock in Tolland, where they listened to the evangelist preach. Stearns was small in stature. But when preaching, what he lacked in height he more than made up for with over-sized gestures, a piercing gaze, unrestrained emotion, and a sing-song delivery some called "the holy whine." Many listeners who at first didn't care for his style eventually warmed up to his obvious sincerity and devotion.

Three years after his conversion to the Baptist persuasion, Stearns concluded that he should take his message to the colonies that lay south and west of Connecticut. This was part of a historic trend. As scholar Christine Heyrman explains, "evangelical revivals in the northern colonies . . . inspired some converts to become missionaries to the American South." Stearns's brother-in-law, Daniel Marshall of Windsor, was also a Separate Baptist preacher. In 1754, the two men moved their families to Cacapon, Virginia, near present-day Winchester.

After working for months with only moderate response, they received word that people living in the Piedmont section of North Carolina would ride long distances just to hear a sermon. So it was that in late 1755, a company of fifteen people, mostly Stearns and Marshall and their families, migrated to Sandy Creek in what is now Randolph County, North Carolina, where they immediately began a church.

With Sandy Creek as his home base, Stearns traveled through parts of North Carolina and Virginia preaching sermons, training evangelists, and planting Separate Baptist congregations. By the time Stearns died in 1771, there were 42 Separate Baptist congregations served by 125 ministers in North Carolina and Virginia. In effect, the migration of the Stearns and Marshall families transplanted the First Great Awakening from New England, and specifically central Connecticut, to the southern back country.

According to the late Sydney Ahlstrom, a Harvard professor and the unofficial dean of American religious historians, those few Separate Baptists who came from central Connecticut were critical to "Baptist expansion throughout the South and the Old Southwest." That's no small difference considering that the dozens of Baptist groups in America today constitute the nation's largest Protestant family.

If I get to another post about this topic, I'll want to say a bit more about the connections between Separate Baptists in the South, like Shubal Stearns and Daniel Marshall, and the American Restoration Movement, associated with names like Barton Stone and Alexander Campbell.

Hughes, Arthur H. and Morse S. Allen. Connecticut Place Names. Hartford: Connecticut Historical Society, 1976. This unique, outstanding resource does not include a listing for a Pulpit Rock in Tolland. Yet, it does list Pulpit Rocks in other towns, indicating that some of them were gathering places for religious activities.

Waldo, Loren P. The Early History of Tolland. An Address Delivered before the Tolland County Historical Society, at Tolland, Conn., on the 22nd day of August an 27th day of September, 1861. Hartford: Case, Lockwood & Company, 1861.


A Note of Thanks

Historians publish their writings under their names. But as we see in the "Acknowledgements" sections of their books, they never carry out nor complete the work all by themselves. Far from it. When it comes to communicating history, we should not imagine that the job gets done by Lone Rangers. Instead, we should recognize that collaborative networks of people make it happen. Thank you to George Caruthers for taking me to Tolland, and also to Carl Sallstrom who listened to my story about Pulpit Rock and who eventually located it. Today, the land on which Pulpit Rock stands is owned by Lloyd Bahler and family. Lloyd was nice enough, on the spur of the moment, to show the three of us around the Bahler family property. Thank you!
Posted by Frank Bellizzi at 4:25 AM 1 comment:

Who's Who? Identity and Peasant Life in Early Modern Europe 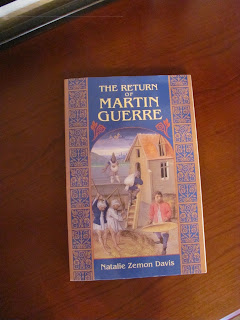 In this book, Natalie Zemon Davis retells the often-told story of Martin Guerre. But as the extensive bibliography and notes suggest, this is the thoroughly-researched, historian's version of the tale (pages 127-57). It is offered, in part, as a reflection on "the significance of identity in the sixteenth century" (viii).

Zemon Davis relates the story as follows: Martin Guerre was a peasant who lived in "the Pyrenean village of Artigat" (vii). In 1538, he was married to Bertrande de Rols, who was also from Artigat. At the time of their wedding, Martin was about fourteen years old, and Bertrande was either nine or ten (16, n.). Apparently, the marriage remained unconsummated for several years. During that time, Martin was subjected to public ridicule due to his impotence. However, several years later Bertrande gave birth to a son named Sanxi (21). In 1548, ten years after the wedding and when Martin was around 24 years old, he was accused of stealing grain from his father. Humiliated for years, and now embarrassed and afraid, Martin abandoned his family and the place he had always known.

Eight years later, "in the summer of 1556," a man presented himself "as the long-lost Martin Guerre. Previously he had been known as Arnaud du Tilh, alias Pansette" (34). Interestingly, the villagers, including Bertrande, welcomed du Tilh as though he were Martin Guerre. Soon, he settled into a peasant's life filled with farm work and family obligation. By all accounts, he and Bertrande enjoyed a blissful relationship. She became pregnant twice more. One of the children, a daughter, survived infancy.

Trouble came four years after the return of "Martin," when he proposed the sale of some of the land that was part of his inheritance, a violation of the Basque norms that his family had always observed. Martin's Guerre's uncle and Bertrande's stepfather, Pierre, had sometimes been uncertain about the identity of the imposter. Once questions about land and money entered the picture, Pierre became the man's determined nemesis. With Bertrande now on his side, Pierre brought the accusation that generated both civil and criminal charges against the impostor.

At his trial, in 1560, the dozens of witnesses were divided on whether the accused was Martin Guerre. However, the impostor was found guilty. On appeal, that decision was nearly reversed. Arnaud du Tilh as Martin Guerre defended himself in what must have been one of the greatest court performances in legal history. Playing up the obvious conflict of interest of Pierre and his family, the impostor was able to provide answers and recite details regarding matters that, seemingly, only the real Martin Guerre would know. For every question, he had a plausible and sometimes even cogent response.

But as fate would have it, just as the appellate court was about to reverse the original decision, the real Martin Guerre appeared. Having "had his leg shot off at the battle of Saint-Quentin" fighting for Spain, Martin Guerre now had a wooden leg (82). Of course, the impostor's charade came crashing down. Having been spared an incorrect judgment, the court then found Arnaud du Tilh guilty of "imposture and false supposition of name and person and of adultery" (86). Within days, he was hanged in front of the Guerre home in Artigat, and his body was burned.

Zemon Davis takes up the question of how the reunited couple might have managed in the years that followed the execution of the impostor. She notes that both of them were culpable: Martin had abandoned his wife and child, and Bertrande had played the wife of a man she must have known was not her husband. The author concludes with this reflection: "The story of Martin Guerre is told and retold because it reminds us that astonishing things are possible. Even for the historian who has deciphered it, it retains a stubborn vitality. I think I have uncovered the true face of the past--or has Pansette done it once again?" (125).
Posted by Frank Bellizzi at 8:45 AM No comments:

Fourth of July, 2015 at the Hernandez Wedding

Posted by Frank Bellizzi at 3:25 PM No comments: