A Trip to Turkey on the Trail of R. W. Officer

For a few years now, I've wanted to travel to two Turkeys. I've now visited one. That country in Asia? The scene of some of the most impressive growth experienced by the first-century Church? That'll have to wait for another time. This time, last Friday, March 9, 2012 to be exact, I went to the other Turkey, a small town located in the southwest corner of Hall County, Texas.

And why did I want to visit this Turkey? Mainly because it is the last home and the resting place of one R. W. Officer, a most impressive historical figure. Born in 1845 in Georgia, Officer was a veteran of the Civil War who later became a preacher, writer, debater, and a renown missionary in Indian Territory (part of what is now Oklahoma). Early on, Officer was a Baptist. But for the big majority of his career as a Christian leader, he was connected to the Churches of Christ. The following are some of my notes about Turkey and my search for him and his family. 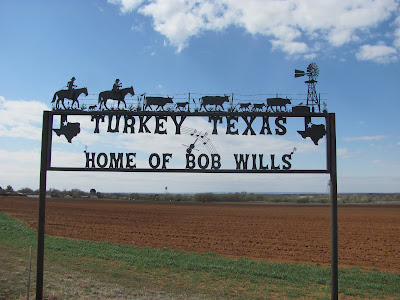 It's sort of a rite of passage now. To get to R. W. Officer, you first have to meet someone else. Entering town from the north, visitors are greeted by this sign paying tribute to Turkey's favorite son, Bob Wills, "the King of Western Swing." Check out the detail of the silhouettes on this sign. Impressive! Incidentally, Bob Wills is one of the few (or, the only?) to be inducted into both the Country Music Hall of Fame (1968) and the Rock and Roll Hall of Fame (1999). I've only recently begun listening to his music. What an interesting, charismatic person he was. He epitomizes the unmistakable spirit of West Texas, the one that says, "Life is what you make it!" I can only imagine the hundreds of thousands of people who had to smile when they heard his songs. He was one-of-a-kind. And, before Wills became famous it's very likely that he was R. W. Officer's barber. 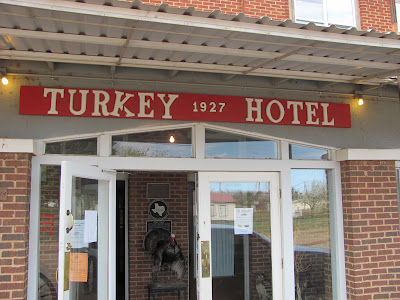 Just one block north of Main Street (Highway 86), on 3rd Street stands the historic Hotel Turkey. Yes, that's a mounted turkey on the front porch. My understanding is that the original settlement was called "Turkey Roost." Just behind the bird are two plaques on the wall . . . 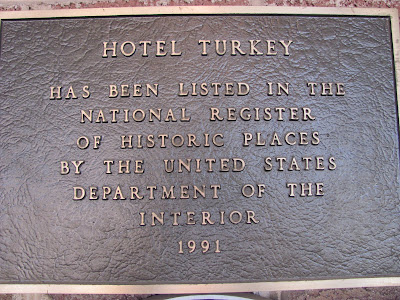 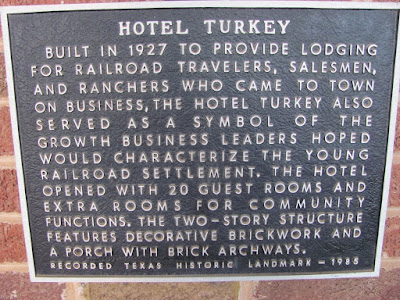 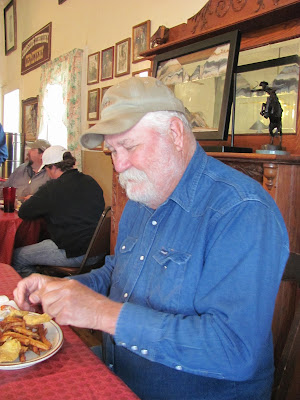 Pictured here is Cody Bell, a friendly guy and the owner of the hotel. When I met him in the lobby, he took an immediate interest in my research and provided me with a good bit of information about the town and its history. In the early 1900s, both sets of his grandparents, the Bells and the Meachams, were early settlers in Turkey. Cody confirmed that President George W. Bush has spent a night or two at the hotel. I know, you Democrats will think that explains the name. 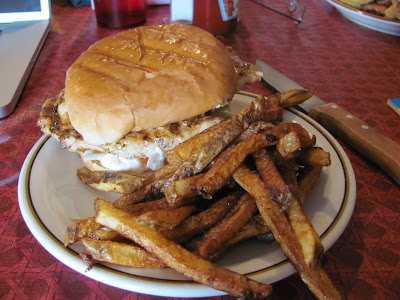 The hotel features an very good restaurant. I thoroughly enjoyed my grilled chicken sandwich, one of the best ever! 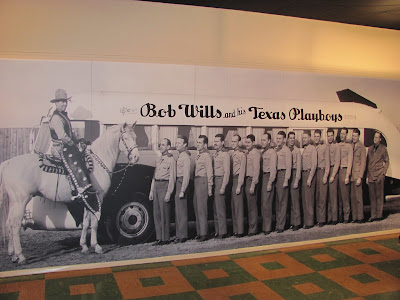 After lunch, before I went out to the cemetery Cody took me over to the old school building that houses the public library and the Bob Wills Museum. Pictured above is just one of the many wall-sized photos in the museum. Fans should make time to visit this place. When you do, be sure to watch the video. The annual Bob Wills celebration in Turkey is held each year on the last Saturday in April. Just one more reason to go back. 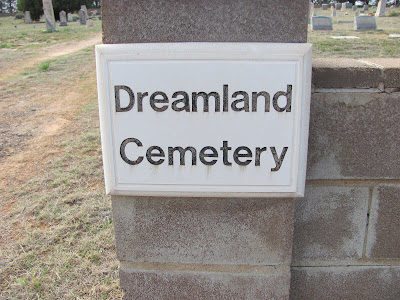 Dreamland Cemetery is a few miles south and east of town. Take Highway 70 south to Farm to Market Road 656. A sign on 70 directs you toward the cemetery. From the highway, the road runs east and then curves to the south. The road divides the cemetery. A newer section lies to the east. The older graves, including Officer's, are on the west side. 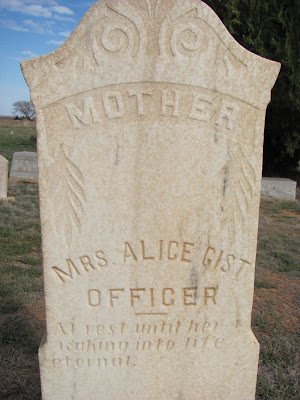 At this point, my assumption is that Alice Gist Officer was R. W.'s second wife. I don't know of any other wives. According to Earl I. West, (Search for the Ancient Order, vol. III, p. 134), Lota Venable Officer died January 30, 1900. I don't know where she is buried. Likely in Paris or Gainesville, Texas, or somewhere in Oklahoma. Another mystery: Alice Gist Officer's tombstone provides no dates. Silas Shotwell, an authority on Officer now living at Fort Sumner, New Mexico, tells me that when Alice died, her husband R. W., then 85 years old, remarked that he was ready to go. Within a few days, he died. So, the presumed date of death for Alice Gist is 1930.

Sometimes, seeing a place for yourself makes a real difference. And here we have a case in point. According to this source, Leon Officer is "the only family member of note in the plot." From that, one would never guess that R. W.'s wife lies buried in the very next grave, a strange oversight.

People still living who grew up in Turkey speak of a "Mrs. Officer" who was a "tough" school teacher. Because these people would have gone to school after 1930, my assumption is that this "Mrs Officer" was not Alice Gist Officer. Was the school teacher Leon's widow, R. W.'s daughter-in-law? Or was she R.W.'s daughter or granddaughter? Also, piecing together the available evidence, it is clear that Alice Gist Officer was not Leon's mother. Yet, "Mother" is her epitaph. So who was her child? 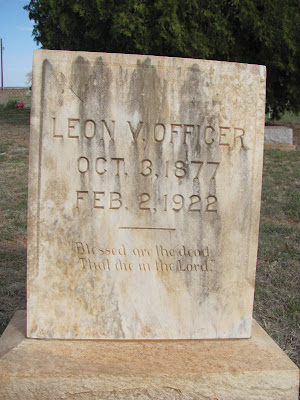 According to my best information, Leon V. Officer (1877-1922) was R. W.'s son, born when the father was 32 years old. Leon never reached his 45th birthday. Remarkably, the father made it to his 85th. Does Leon's middle initial stand for "Venable," the maiden name of Officer's first wife, Lota? I wonder. 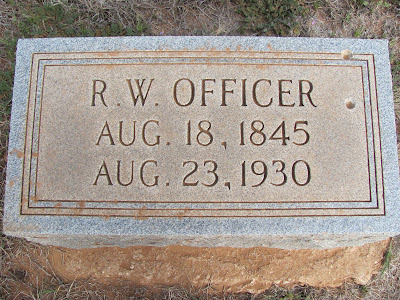 I have found a place in West Texas where we are almost unknown for several counties. They have called me. There is no use to go there to stay a few days and return. On July 1, I am going to stay. The Indian Territory is coming in. It will be settled by white people, and my work there is done. I am off again for another waste, or neglected place, trusting God's promise and the brethren. (R.W. Officer, writing in the Gospel Advocate, as quoted in Earl I. West, Vol. III, p. 134).

Clearly, the marker for R. W. Officer's grave does not go back to 1930. I have no information on who provided this stone or when it was set. I'm told that this stone was most likely crafted in Clarendon, Texas, a larger town about 40 miles north of Turkey. The quality of the surface and the style of font suggest that the stone does not go back very far. What is clear, however, is that the Methodist Clergy badge that was attached to this marker at one time has since been removed. Note the two holes at the top right of the stone. No, I'm not the one who removed the badge. But attaching it to this headstone does seem to have been inappropriate. 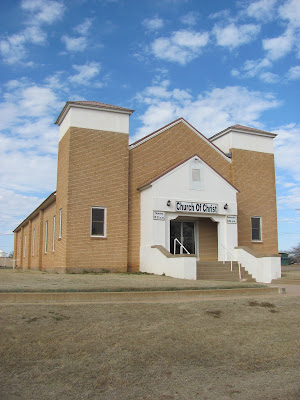 A block or two north and east of the Hotel Turkey stands the meeting house of the Church of Christ. Along with Cody, I shared lunch with the preacher for the congregation, Stuart Smith. Stuart impresses me as being a fine guy. In addition to serving as a minister, he is a teacher and coach in the local school system. He has worked there in Turkey for 21 years. It was apparent to me that Stuart, his wife, and their family are highly respected in the community.

From Turkey, I traveled north and east to Memphis. From there I went over to Altus, Oklahoma to spend the weekend with my folks. On Saturday, it gently rained the better part of the day. So we stayed in, except for a visit with Betty Osborne, the widow of the late Bill Osborne. The two of them were a dynamic team. For many years, Bill, who possessed a unique mixture of homespun humor and Christian charisma, served as minister of the Elm and Hudson Church of Christ in Altus. Betty was the congregation's secretary. No one was better at encouraging and building up other people than the Osbornes. I'll always be grateful to the Lord for their remarkable service to His church.

On Sunday morning, it was a joy to visit my home congregation, to worship the Lord sitting next to my parents. In his lesson that morning, Tom Bailey emphasized that God is good.
---------------
Special note: I began this weblog in January 2005. Since then, I've had a few regular readers and a lot who have dropped by every now and then. I'm really thankful for the long-distance relationships that have begun, and for the reconnections I've made with people I have known in various places through the years. Special thanks to those who have commented. Like all bloggers, I'm always thrilled to get meaningful feedback. I'm writing this note mainly because this post just happens to be my 600th.

Yes, I plan to keep going. But not because of I have thousands of followers. I don't. Fact is, there have only been a few times that I even considered what makes a blog popular: Ten Things about this current topic, or Five Ways to do something everybody wished they did. No, from the first post until now my main interest has been getting down in print some of the things that were on my mind at the time. For me, this is a matter of talking about something I'm currently into, sorting out something that's running through my mind. If you truly understand something, then you can clearly say something about it. If you can't, then maybe you should reconsider your assumption that you understand it. So for me, blogging is a matter of making sure I have some level of understanding. Like I said, for me that's been a big part of the motivation.
Posted by Frank Bellizzi at 8:55 PM 9 comments: