The Religious Roots of American Environmentalism 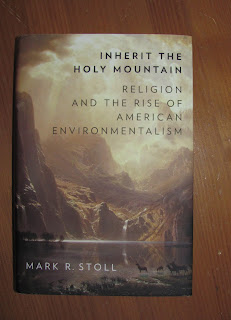 Mark Stoll, Associate Professor of History and Director of Environmental Studies at Texas Tech University, begins this wide-ranging study with an important historical footnote: in 1967 Lynn White Jr. published an essay in Science magazine "claiming that Christianity had caused the environmental crisis," a notion that lingers "in the back of a lot of people's minds when they think about religion and the environment" (1).

Stoll noticed, however, that many figures in the history of American environmentalism grew up in either Congregational or Presbyterian churches, both types "in the Calvinist tradition" (2). What was the connection? Starting with questions like that, the author has written a book that "overlays American environmental history on American religious history" (6). Stoll further describes his work and identifies his thesis as follows:

Inherit the Holy Mountain uses religion as a wholly new tool for dissecting American environmental history. Historians have invoked a long list of factors to explain the motivations behind conservation and environmentalism: nationalism; monumentalism; Transcendentalism; democratic ideals; growing appreciation for wilderness; nostalgia for the disappearing frontier; alarm at disappearing game; antimodernism; fear of urban pollution, corruption, disorder, immigrants, and class conflict; automobiles and leisure time; and masculine ideals of conquest and domination. All of these factors, and more, played their roles. Yet as this book shows, a religious perspective gives the history and development of environmentalism a trajectory, unity, and power. Rather unexpectedly, even to the author, religion turns out to provide extraordinary insights into environmental movement's past--and future (9).

So what exactly are those "extraordinary insights"? For one, Stoll shows how Calvinist thought served as the foundation of American environmentalism, "from its moralism to its suspicion of humans in the landscape to its urgent evangelism" (53). All of these had everything to do with the Puritan vision established in books like John Milton's classic, Paradise Lost. Thus, when Ralph Waldo Emerson and other Transcendentalists recommended spending time alone in the woods or some other natural surrounding, they weren't suggesting something new. They were repeating "long-standing Calvinist advice" (41).

Stoll describes the theological ethic of stewardship, accountability to God for all things. This was an old, patristic theme, but one that Calvinists, especially Puritans, revived and emphasized. A Puritan buzzword was improvement. Along this line, one should conserve soil and improve land. A good steward is the farmer who uses the best, most productive techniques, and who also ensures that the land will be productive in years to come. It was actually Huguenots, French Calvinists, who "wrote the pioneering works of modern agriculture" (72).

Moreover, in the same way that American environmentalism was not fathered by Emerson, nor was it born on the Atlantic coast somewhere near Boston and Harvard College. Rather, it was fathered by Calvinist thinkers, and was born along the Connecticut River Valley, near places like Northampton, Massachusetts, and Hartford, Connecticut. The movement's alma mater was Yale College in New Haven, Connecticut, home to Yale Forestry School, the nation's first such postgraduate program (91).

The movement influenced not only schools, but art as well. Born to Congregationalists, famed landscape artists Thomas Cole and his protege Frederic Edwin Church inspired "the nation's leading advocates and creators of parks, forest conservation, and agricultural improvement." Indeed, with only one exception,


every one of them either like Church grew up in New England Congregationalism or was no more than one generation away. The American conservation and environmental movements were born in the elegant steepled churches rising above the greens of Connecticut Valley towns (78).

During the years that surrounded the dawn of the twentieth-century, American Presbyterians, similar to those earlier Congregationalists, built on the Reformed tradition which represented "a virtual training ground for environmental activism" (140). But whereas New England Congregationalists of the nineteenth century focused on the stewardship of the individual over his farm, "Presbyterians . . . called the nation to moral account."

Indeed, the Progressive Era belonged to Presbyterians. "Between 1885 and 1921," Stoll writes, "Presbyterians held the White House for nearly 28 out of 36 years, over three-quarters of the time" (150-51). From the 1880s through the 1940s, Presbyterians headed up the Department of Interior almost the entire time. Their leaders included, among others, John Muir, founder of the Sierra Club, and U.S. Presidents Grover Cleveland, Benjamin Harrison, Theodore Roosevelt, and Woodrow Wilson. This was the heyday of American conservation. As Stoll notes, however, Presbyterianism in the U.S. has since become liberal and ecumenical, not so confident in its righteousness, less preachy.

Stoll explains that since then environmentalism has not gone away, but has fractured into a number of unorganized impulses and movements. Even to this day, environmentally-minded people are often lapsed, "spiritual but not religious," Presbyterians of some sort. "For three decades after World War II theirs were the most prominent and effective voices for environmental causes" (174). These folks represent a sort of "second wave" of Presbyterian interest in "a proper moral relationship of humans to the natural environment" (175). They include such names as Alice Hamilton, Rachel Carson, Jane Jacobs, and Annie Dillard (193). From Muir to Carson, they exhibit a great capacity for identifying and railing against evil. Yet, unlike the Puritans, they were not so good at holding up a unifying vision for how to order a society.

What has happened more recently? Stoll answers that during the last few decades an "outsider" environmentalist mode replaced the old "insider" conservation ethic. Given that change, it should come as no surprise that Henry David Thoreau's reputation rose spectacularly. During the countercultural 1960s and 1970s Thoreau "was canonized as the greatest saint in the environmentalist pantheon" (215).

Beginning around that time, some African Americans, particularly Baptists, along with Jews, Catholics, Methodists, and Episcopalians, have become involved in environmental issues. But the environmentalism they promote tends to be more about social justice, rather than about "nature, wildlife, and resources" (234). Stoll points out, for example, that unlike the old Congregationalists, contemporary Baptists tend to be much more individualistic than communal. Consequently, environmentalists who grew up Baptist, like the recent presidential candidate Al Gore, tend to preach sermons to individuals rather than to the government about what it should be doing.

Environmentalism stemming from the black church has typically been a fight against "environmental racism" (238-39). On the Roman Catholic front, in the wake of Vatican II, it appears that of all the issues Catholics disagree about (abortion, women in the church, clerical celibacy, etc.), the one thing they agree on is "the centrality of the moral principle of social justice" (243). Indeed, as Protestant environmentalists have faded even more, "Catholics along with Anglicans have fairly taken over the enterprise of environmental writing that is explicitly religious, as opposed to vaguely spiritual" (249). Jewish environmentalism tends to relate to the faith's emphasis on community, and involves human beings as part of the subject. Jewish theology associated with justice and righteousness "implies social goals and duties" (258).

The up-to-date report? "If it is not dead yet, environmentalism is certainly weak, divided, and wandering in the wilderness" (275).

In sum, Stoll makes a solid case that, in fact, religion had everything to do with the rise of American environmentalism, and that a person's formative religious outlook brings with it a controlling theology and view of the world, facets that always make a difference in the way a person thinks about nature. Our environmental crises would not improve with the disappearance of religion, but they might improve with a religious tradition that could effect systemic change for the better.
Posted by Frank Bellizzi at 1:00 PM No comments: