Adler, Selig. "The United States and the Holocaust." Abstract

Adler cites in footnote 1 several authorities who agree that "the United States could have done more to mitigate the catastrophe" (14). But the U.S. did not because of three factors: (a) Washington's incorrect assumptions about the Jewish plight in Europe and what the U.S. could do in order to alleviate it. (b) The refugee predicament came far behind other concerns of the time, especially the war. (c) The aid which did come was too little, too late (14). Most of the article concerns the political mistakes and misdeeds of the U.S. during the Holocaust which resulted in many, many more deaths.
Posted by Frank Bellizzi at 5:40 PM No comments:

Preachers at the South Thornton Church of Christ, Piggott, Arkansas, 1965-1993

It's now been more than twenty years since I and my young family moved from NE Arkansas to Southern New England. In August of 1993, we said our sad good-byes to members of the South Thornton Church of Christ in Piggott, AR. Then, we spent three days (me driving a diesel truck with my wife and two small children in the cab, and with one of our cars in tow) making our way to Wallingford, CT, where I became the preacher for the Ward Street Church of Christ.

During the last two years before my move from Arkansas, especially in late 1991, I conducted a good bit of research on the history of the South Thornton congregation. More about that in a future post perhaps. Here is the best information I have about pulpit preachers for the congregation from 1965 to 1993:

Richard Runions, served as an associate minister 1974--1983
Posted by Frank Bellizzi at 8:45 PM No comments:

The American Revolution: A Brief History by a First-Rate Scholar

In the "Preface," to this brief survey, historian Gordon S. Wood suggests that the American Revolution should simply be "explained and understood." And that's what this book sets out to do: to explain  "[h]ow the Revolution came about, what its character was, and what its consequences were" (xxv).

Wood's approach differs from the standard telling of the story. Whenever I hear the phrase "the American Revolution," I naturally think of what I was taught were the high points of "the War of Independence": events like Paul Revere's ride, battles at Lexington and Concord, Bunker Hill, and Cornwallis's surrender to George Washington at Yorktown. It's the stuff of old-style history. Great men and events. Kings and wars. And, when describing wars, guns and trumpets.

However, historians like Wood want to tell us that, although never incidental, the war was not the essence of the Revolution. It was, instead, something more like a result, or a series of events that accompanied the Revolution. Consequently, only one of the seven chapter titles in this book contains the word "war." Indeed, Wood pays surprisingly little attention to events whose names we easily recognize.

Instead, he tells about the social, economic, political, and cultural forces that created a burden for great change in the British American colonies, a burden that was so compelling that it lead to open rebellion against an imperial king. Even more, Wood describes the new world, with new sensibilities, that came in the wake of the war; an emphasis on the rights and responsibilities of individuals, and what America could and ought to become. Above all, the qualified sense that all men were created equal began to change attitudes toward women, marriage, children, and slaves. Economic questions, international trade, political theory and practice. Nothing, it seems, went untouched by the Revolution. To cap it all off, a spirited debate between Federalists and Anti-federalists resulted in a federal constitution for the United States of America, a document that from the very beginning, recognized the political sovereignty of "We the people."
Posted by Frank Bellizzi at 9:30 AM No comments:

Aargh! A Book about Pirates! 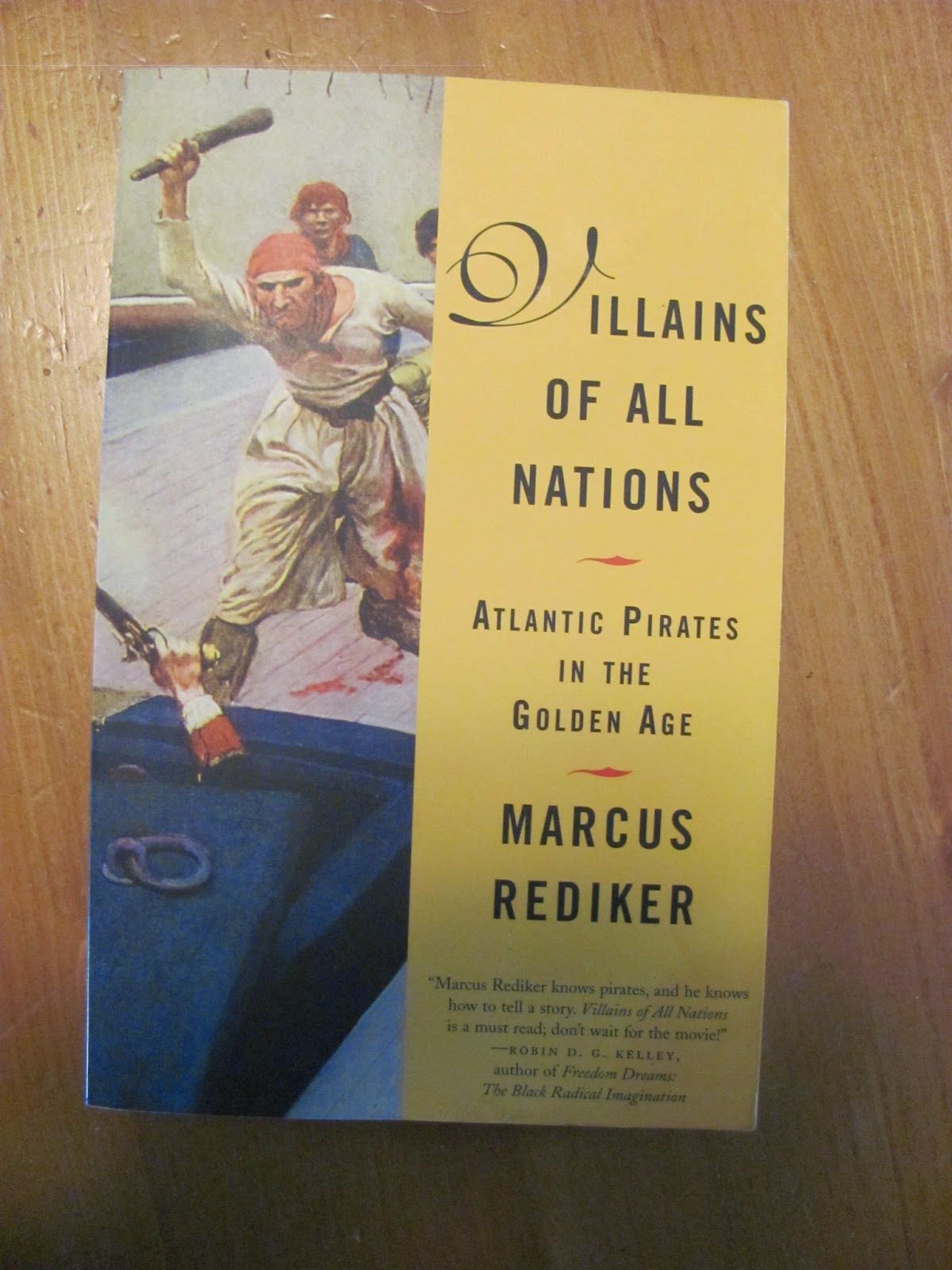 
Marcus Rediker's Villains of All Nations is a cultural and social history of pirates on the Atlantic. By all accounts, the book distills Rediker's previously published writings about pirates, which first began to appear in 1981.

The author identifies the years 1650-1730 as piracy's "golden age." He says those 80 years break down into three distinct periods, each one connected to a particular group: (1) the buccaneers: European "sea dogs" who attacked the ships of Catholic Spain, 1650-80, (2) pirates who worked the Indian Ocean, with their base on Madagascar, during the 1690s, and (3) the subjects of this book, the largest, most successful of the three groups: pirates who terrorized the Atlantic just after the War of Spanish Succession (1701-1714)—which had established the perfect conditions for the rapid growth of piracy—until 1726, by which time the war against pirates was won.

This book focuses on those few thousand outlaws at sea who were active from 1716 to 1726, the decade described by the author as the heyday of piracy. Rediker highlights that, even when standing on the gallows, pirates routinely and defiantly announced that their short lives of crime were at least happy lives. Compared to serving on the crew of an abusive, tyrannical captain, their lives of piracy had been downright “merry.” Essentially, condemned pirates claimed that they had been driven to live as outlaws. Taking their claims seriously, Rediker argues that, in spite of the common image of pirates as greedy treasure seekers, the subjects of his book started out as abused, impoverished working seamen. Upon becoming pirates, they organized themselves in ways that were highly democratic, and they spoke of themselves as "honest" men (and a very few women) who were not seeking loot so much as justice for the common sailor.

As the foregoing suggests, Rediker works with what appears to be a wide array of sources, and seems to have had the primary data under a microscope for a long time.

To see and hear Rediker himself, check out this presentation he made about pirates back in 2007.
Posted by Frank Bellizzi at 9:30 AM No comments:

Aston summarizes the main point of this fine, substantial article in her first paragraph: "Before 1381, though the English governing classes had encountered heretics as well as rebels against society, they had never had to deal with either on a large or concerted scale. By the end of May 1382 both had been on their hands, and heresy (in the event) had come to stay.  . . . A heretical movement and a major upheaval among the lower orders of society had arrived, in point of time, together" (1). Having detailed the political aspects of early Lollard history, Aston concludes: "This is not, at all, to deny that there was, throughout, a very genuine alarm for the salvation of souls, and concern for the maintenance of the orthodox faith; nor to say that this aspect of the Lollard movement was not, and is not, the first to be considered. But the nature of the heresy, of the society in which it spread, and of the government which had to deal with it, were such that its religious implications could not be considered alone. And other happenings of this period ensured that they were not. Sedition and dissent had come of age together" (35-36).
Posted by Frank Bellizzi at 9:30 AM No comments: