J. C. Beker on the Theology of Paul 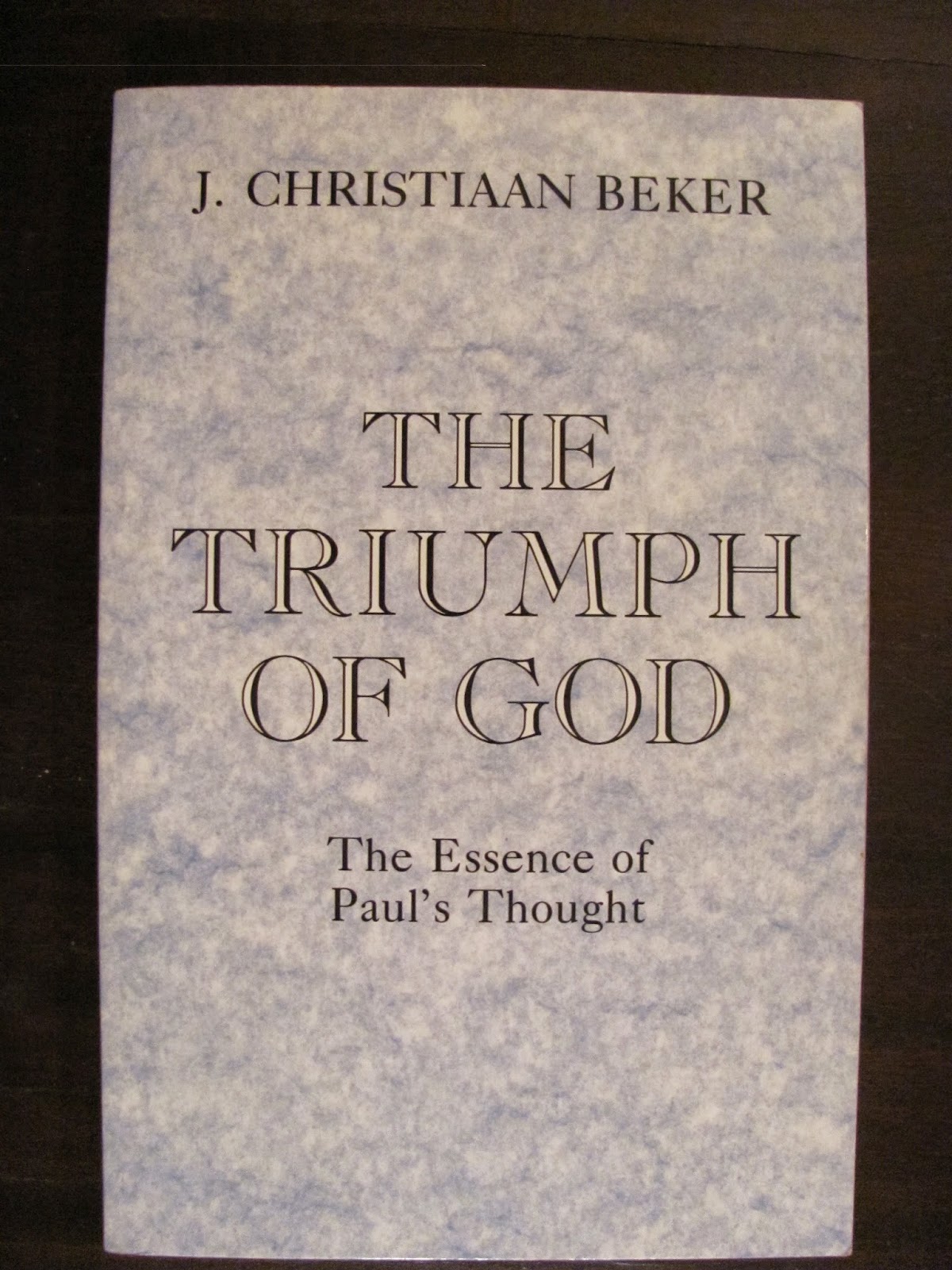 
How should the letters of Paul be interpreted? Is there a key that will unlock the door to understanding? In The Triumph of God, the late J. Christiaan Beker, who then taught New Testament Theology at Princeton Theological Seminary, presented his answers to those questions.

In 1980 Beker published Paul the Apostle: The Triumph of God in Life and Thought (Fortress Press, 1980), an insightful and provocative book which established him as a leading interpreter of the Apostle. In 1988, he issued a German, popular-level abridgment of the first book. His abridgment contains concepts from another of his previous works, Paul's Apocalyptic Gospel (Fortress, 1982).

The Triumph of God is Loren T. Struckenbruck's translation of Beker's German work of 1988 with an appendix entitled "Paul the Theologian." So, the book I'm reviewing here was at the time Beker's most recent attempt to explain to a popular audience what Paul's letters were, and are, all about.

Following the preface, which introduces the reader to Beker's basic concepts, "Part One: The Pauline Letter" presents his answer to the question of identifying the universal truth conveyed in Paul's contingent, occasional letters. Beker explains that this historical enterprise has often sacrificed the contingency and particularity of Paul's letters in order to gain coherence and "catholicity," which other attempts to interpret Paul conjecture too much. He critiques what he calls the "catholic solution" in which the author of Acts is said to have reduced the entirety of Paul's thought to a minimum. This solution stands behind several textual variants among Paul's letters which would give them a more universal appeal.

Second, Beker faults the "Marcionite solution" for its arbitrary attempts to identify the center of Paul's thought, attempts which sacrifice the situational character of the Apostle's letters in order to "discover" their doctrinal core.

Third, the "psychological solution," which proposes Paul's developing religious psyche as the basis for discontinuity or diversity among his letters, mistakes a conjecture for a real answer. For Beker, the satisfactory answer must be rooted in something firmer than mere speculation about Paul's religious psychology.

Having dispensed with what he considers misguided attempts to understand Paul, Beker turns to his own two-part solution. First, Paul's letters represent a dialectic, an interaction between the Apostle's thought (which is coherent) and the situations to which he writes (which are contingent). This approach rightly views Paul not as a systematic theologian who wrote timeless, doctrinal treatises, but as a missionary interpreter of the gospel who wrote occasional letters to churches in a variety of unique situations. Second, the coherence of Paul's thought is rooted in his Jewish apocalyptic worldview, which is the "basic framework" of his gospel. Beker outlines what he means by "apocalyptic worldview": (a) the faithfulness and vindication of God, (b) the universal salvation of the world, (c) the dualistic structure of the world, and (d) the imminent coming of God in glory" (p. 21). Then he elaborates on each point.

In "Part Two: Theological Consequences," Beker demonstrates his first thesis by revealing contingency in Romans and Galatians. With seasoned observation he notes, for example, that in Galatians 3 Paul's argument centers on Christ, the seed of Abraham, as the object of faith; but in Romans 4 it is rather the God of Abraham who is the object of faith. These sorts of distinctions reveal that, far from being a timeless systematic theology and its abstract (as they are typically portrayed), Romans and Galatians employ basic symbols such as "law," "Abraham," and "faith" in significantly different ways.

Next, Beker demonstrates his second thesis that it is the apocalyptic background that represents the real coherence in Paul's thought. Examining the Apostle's interpretation of the death and resurrection of Jesus, his triumph over demonic powers in his cross, and the Christian life of anticipation, the author shows that Paul's thought is, indeed, rooted in an apocalyptic outlook. Beker adds a chapter in which he discusses the close tie between sin and death in Paul's thought, along with Paul's understanding of the Law as both good but also instrumental in the hands of death.

Finally, the appendix underscores, first the need to find the coherence of Paul's thought at a level beneath the text of his letters and, second, the transparency of apocalyptic as that coherent center, a quality lacking in other attempts to interpret the Apostle. A useful bibliography, index of passages cited, and index of names round out the book.

At least two questions arise in response to Beker's position. First, will not the "fluid" and "subtextual" center of Paul's theology allow for a more open stance toward questions of authorship? (Beker denies the Pauline authorship of Ephesians, Colossians, 2 Thessalonians, and the so-called Pastoral Epistles). In other words, how can the flexible coherence of Paul's thought become the final arbiter in deciding which letters should be attributed to him? Second, if the apocalyptic framework and semantic system which are necessary to a true understanding of Paul's message no longer exist as such, in what way can his "truth of the gospel" be proclaimed in our contemporary setting?

Notwithstanding such questions, preachers, teachers, and other serious students of Paul can profitably use this book to understand one of the Apostle's leading modern interpreters who consistently provides penetrating insight into Paul's thought and letters.

Note: An earlier version of this review first appeared in Restoration Quarterly, Volume 35, Number 1, 1993.
Posted by Frank Bellizzi at 11:35 AM No comments: