A church that imagines it stands beyond history, beyond conformity to culture, beyond sin, and beyond tragic misunderstandings and miscalculations--such a church has little to offer the world. But a church that owns up to its blunders and its compromises--its humanness--is a church that can both receive and reflect the love and grace of God to the world around it. In so doing, such a church contributes mightily to the restoration of the gospel of Christ.

Leonard Allen and Richard Hughes, Discovering Our Roots, p. 9.
Posted by Frank Bellizzi at 9:45 AM 1 comment:

Returning a Favor to Dick Marcear

Next Sunday morning, I'll be speaking at the Colonies Church of Christ here in Amarillo. Their preacher, Dick Marcear, had knee-replacement surgery last week. He called me a day or two before to ask if I'd handle the preaching responsibilities on the 27th.

It's funny how things turn out sometimes. More than a quarter century ago, when I was a Bible student at Freed-Hardeman College, I started getting a few invitations to preach at some of the small congregations of the Church of Christ there in West Tennessee. I was getting preaching appointments! That was the good news. The bad news was, I didn't have a very good idea of what I was going to say when I got there.

About that time, I discovered in the college library a publication called Truth for Today. It was a magazine written by and for preachers. Every issue was filled with manuscript sermons. So, being in my situation at the time, I began going through back issues of Truth for Today looking for the very best lessons. I discovered a preacher out in Amarillo, Texas named Dick Marcear. As I read his sermons, I thought to myself, "This guy is really good. He preaches the Bible. His sermons are clear and imaginative, with lots of good quotes and illustrations." And at that point, I began to make some of those sermons my own.

So I guess it's only fitting that I would be preaching next Sunday instead of Dick Marcear. He's already done something similar for me. I take it as just another reminder that whenever we do something good, we don't always know who we might be helping along the way.
Posted by Frank Bellizzi at 8:15 AM No comments:

Bill Humble on The Archaeology of the Bible 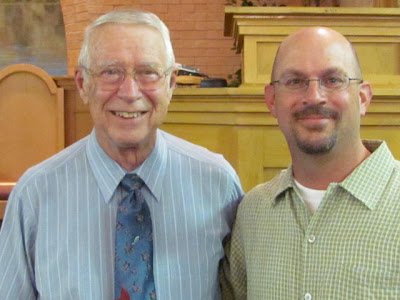 Over the next few months, the San Jacinto Church of Christ will once again play host to Dr. Bill Humble. Now retired from Abilene Christian University, he has served for many decades as an influential teacher, writer, and speaker. And although he is now advanced in years, Humble hasn't slowed down a bit. His presentations are excellent. Last summer, he taught a series of lessons on "The World of Paul." After one of the sessions, I had my photo taken with him.

This time around he's speaking about "Archaeology and the Bible." Sessions are on Sunday evenings from 6:00 to 7:00 at San Jacinto, 823 Mississippi in Amarillo (corner of Line and Mississippi). Everyone is welcome to come. I'm encouraging my students to attend at least one session. I think that if they come to one, they'll want to return. Here's the schedule of dates and topics:

Posted by Frank Bellizzi at 8:05 AM No comments:

A week ago last Friday, on February 4th, I received word that Earl Irvin West had died that morning. He was 90 years old.

For those who don't recognize his name, Earl West was the grandfather of contemporary historians among the Churches of Christ. His 4-volume survey entitled Search for the Ancient Order has long been a standard reference work. In addition, he published several other books and many dozens of articles. I just bought a copy of his brief autobiography called Searcher for the Ancient Order: The Golden Odyssey of Earl I. West. I look forward to reading it.

For many years, West served as a professor of religious history at Harding University's Graduate School of Religion in Memphis. From 1987 to 1997, I was a part-time, commuter student at Harding. During those years, I took three courses with Dr. West:

I won't say that the class on the early church was a bad one. It wasn't. But it was when he was teaching Restoration History that West was really "in his element." As he lectured about people like Alexander Campbell, Barton W. Stone, and Jacob Creath, Jr., you sometimes got the feeling that West actually knew those people. And I was always impressed that anytime a student asked him to elaborate, it was clear that he had at his fingertips much more information than he had planned to present. As a historian, he didn't just know the big rivers on the landscape. He also knew every creek and stream. A few other things I especially remember about my teacher:
Most of all, though, what impressed me about Earl West was that he believed it was much more important for a person to be a real follower of Jesus than it was for him to be a scholar. He loved his subject, not merely because he was a historian, but mainly because he was a Christian. And though I didn't know him well, I'll always love him for who he was and what he stood for.

Blessed are the dead who die in the Lord from now on. Yes, says the Spirit, that they may rest from their labor, and their works will follow them. --Revelation 14:13
Posted by Frank Bellizzi at 7:15 AM 3 comments: 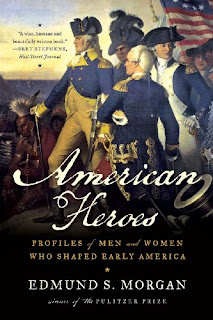 Last night on my way home from work, the car thermometer said it was 4 degrees Fahrenheit outside. But there was something else even more significant weather-wise: a gusty wind out of the north blowing around 30 miles an hour. And then, it started to snow.

When I woke up this morning, the temperature was 0 and it had snowed about 7 inches. Of course, in Amarillo 7 inches of snow means you've got drifts 4 and 5 feet high. Area schools were closed for the day. So we stayed home, built a fire, ate, watched TV, and read.

A good bit of today I spent reading the latest from historian Edmund S. Morgan, American Heroes: Profiles of Men and Women Who Shaped Early America (New York: Norton, 2009). It's a collection of articles and essays--some never published before--that Morgan, now 95 years old, has written through the years. And although some of them were written as far back as the 1930s, they're all as fresh and alive, instructive and inspiring as ever. Here we have in all their glory and infamy, Puritans, witches, Quakers, and Revolutionary leaders. Morgan combines his penetrating insight into the past with some wonderful quotations from primary sources. Each chapter can be read in anywhere from 10-30 minutes. And each one is a perfect little gem. Just right for an afternoon at home.

So that's what I'm reading these days. How 'bout you? Any good books you've recently discovered?
Posted by Frank Bellizzi at 6:25 PM No comments: