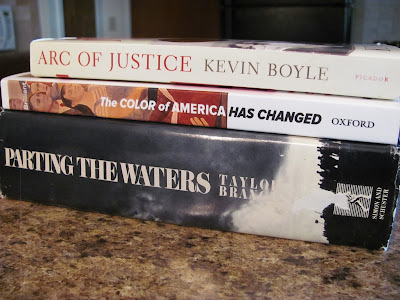 If you're interested in exploring how race and civil rights played out in America during the last 100 years, you could hardly find three better books than these. To follow the story chronologically, you would read Boyle, then Branch, and finally Brilliant.

Boyle tells a story from 1920s Detroit. Branch focuses on Martin Luther King, Jr. and the American Civil Rights movement from 1954 to 1963. Brilliant looks at civil rights in California between 1941 and 1978.
The tight monograph in the group is Brilliant. In my opinion, due to book size and literary style, the easiest to read is Boyle. Here's a taste of each one:

The first thing readers should know is that Taylor Branch has a serious "man crush" on Martin Luther King, Jr. His obvious bias is just fine with me mainly because (a) it's understandable and (b) it's nice when an author doesn't attempt to hide what he really thinks. The second thing to know is that this door-stop of a book is just the first of three volumes chronicling the life and times of MLK. Branch begins with the assumption that the life of Martin Luther King, Jr. "is the best and most important metaphor for American history in the watershed postwar years" (xii). For obvious reasons, he also asserts that any biography of King must relate the story of the civil rights movement. Branch gives some attention to King's predecessors, his family of origin, and his early years. However, this lengthy, engaging narrative really takes off in 1954, when King became the minister of the Dexter Avenue Baptist Church in Montgomery. It ends in 1963 with the March on Washington and, finally, the assassination of President Kennedy. Branch’s focus on King has drawn criticism from those who see the leadership of the civil rights movement through a much wider lens. This book won a Pulitzer Prize.

Boyle, Kevin. Arc of Justice: A Saga of Race, Civil Rights, and Murder in the Jazz Age. New York: Picador, 2004.

Ask any well-informed American what the 1920s were all about, and the answer will likely include flappers, speakeasies, dancing the Charleston, the Harlem Renaissance, and the growth of jazz. Arc of Justice reveals that the answer should also include the presence of deadly racism in America, even in a northern city like Detroit. Boyle sets out to tell the story of one Ossian Sweet, his family and friends, and the incident and subsequent trial that made him a significant historical figure. A fine piece of journalistic and popular history, this book does not begin with a thesis statement per se. As Boyle continues, however, it appears that he wants to drive home the point that although the saga of Ossian Sweet is a compelling story, one that should be told, of greatest significance is the story's context, an American racism that often seems to recognize no restraint or limit. In that sense, it might be possible to categorize Arc of Justice as a work of microhistory.

The main title of this book quotes the insightful lawyer and author Carey McWilliams (1905-1980), who made the observation as early as 1943. McWilliams was referring to a racial diversity in America that simply did not match up with the standard black/white binary conception of racial differences and interests. It was significant that McWilliams lived for many years in California, home to large numbers of Asian-, Mexican-, and Native Americans. Brilliant's book "examines the civil rights consequences of California's racial diversity--how America's 'racial frontier' became America's civil rights frontier" (5). Its coverage begins in 1941, the year the U.S. was dragged into the Second World War, an event that was soon followed by the internment of over 100,000 Japanese Americans. The book concludes in 1978 with the Regents of the University of California v. Bakke "reverse discrimination" case.
Posted by Frank Bellizzi at 1:00 PM No comments: