Blizzard of '13: Big-time Snow in the TX Panhandle

Top photo was taken at 2 p.m. on Sunday, Feb. 24th. It was about 68 degrees with a light wind. The camera is facing north. As you can tell from the sun-drenched yard, the view to the south was cloudless. I could hardly believe that a blizzard warning would go into effect at 6 p.m. 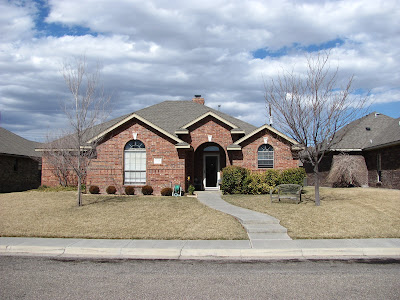 By 10 p.m. it had hardly snowed at all. But it had gotten very cold. In just a few hours, the temperature dropped by about 40 degrees. The bottom photo was taken this afternoon, Monday, about 24 hours later. The temperature stood at about 30. 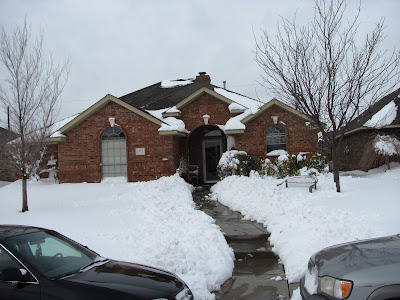 There were some pretty high drifts near homes and fences. Much of Amarillo and Canyon was shut down today (public schools, colleges, various businesses, and the mall). I suspect there will be several closings and cancellations for tomorrow as well. This snow was wet and heavy. 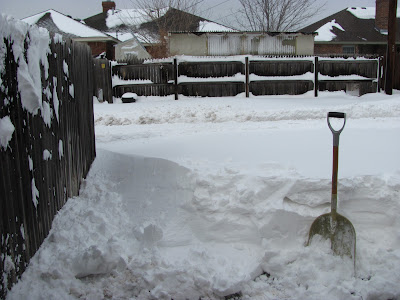 They just announced on the evening news that the official measurement is at least a foot of snow, and more like 19 inches in some places. Area schools will be closed tomorrow as well as today.

England and the Early U.S. in Asian Trade

This book is about Anglo-American capitalism in Asia. The story, says author James R. Ficther, illustrates "the deep links between the United States and the rest of the world from that country's inception (2-3).

For what it's worth, the part about "from that country's inception" is significant. The field of historical study that focuses on the U.S. and the rest of the world is growing rapidly. More to the point, it emphasizes not so much U.S. impact on the rest of the world, but rather the world's contributions and connections to U.S. history.

In this book, Fichter notes that American international traders did quite well for themselves in the years that immediately followed the American Revolution. Their economic success helped to pave the way for the tremendous growth that the U.S. experienced during the nineteenth century. But how did it happen? A careful historian, Fichter argues that there were a number of global factors at work in the rise and success of early-U.S. international trade. According to the author, some of these factors were as follows:

1. A strong American resistance to state-sponsored monopolies. The English East India Company was the only corporation that could legally import Asian goods, like tea, to Great Britain and her colonies. This, says Ficther, was at the root of the Boston Tea Party in December 1773. It wasn't merely that British subjects in America resented taxes on tea. It was that they also rejected the monopoly that locked American merchants out of the import business. From the beginning, the United States held onto the economic theory that insists that open and fair trade is a good thing for everyone.

2. The French Wars, which lasted from about 1793-1815, were an incredible distraction and impediment to European trade. European navies required ships for military purposes. Hostile countries interfered in each other's international trade. All along, the U.S. was basically neutral. So its trading vessels could safely sail under the American flag and do business with anyone.

3. Asian sellers wanted to be paid by Western buyers in silver. But there wasn't much of that in the early United States. American business leaders remedied that problem by selling shares in a given trading voyage to sometimes twenty or more individual investors. Most of these investors could never have owned a ship or financed a voyage. But they could still get in on the huge profits that came from international trade. In essence, by pooling their silver, Americans were not only able to make a lot of money, they were also able to quickly become major players in the game of Western trade with the East.

4. In spite of all its pomp and pride, the English East India Company, a state monopoly, was incredibly inefficient. Ironically, by attempting to retain its authority and unique legal status, it defeated itself.

5. British colonization in Asia created a whole set of problems associated with ruling a place so far from home. The United States didn't have those problems because it didn't have colonies in Asia.

By 1815, the English East India Company was kaput. Also by that time, enough American international traders had accumulated enough capital that they were able to help other industries in the U.S. to grow. In short, the British came to adopt a superior approach to Asian trade. While that was happening, the United States became a major player in Asian trade. The foregoing is nothing like a complete review of this book. But it does present some of the highlights.

Now, what was best about this book? I'm no expert on this topic, but I can tell you about what struck me. I think that the scope and depth of this book are impressive, to say the least. Ficther has spent a good bit of time in libraries and archives literally all over the world. Because of the extent of his painstaking research, he is able to tell a broad, complex story that takes into account a tremendous amount of wide-ranging information. This book represents quite an achievement, one that the reader will learn from and appreciate.

What wasn't so good about this book? While focusing on economics, Ficther tends to ignore the political dimension of his story. This shows up when one takes note of the featured actors. The author pays a lot of attention to people like American merchants, ship captains, and representatives of the East India Company. By contrast, we hear very little about significant politicians of the day. Perhaps the most glaring omission is Fichter's near silence about the labor of slaves in the Caribbean, an absolutely vital aspect of this episode in history. I am reluctant to fault a book along this line because it seems like faulting the author for not writing a different book. But I do think that more attention to the issues I have mentioned here would make this really fine book that much better.
Posted by Frank Bellizzi at 4:55 PM No comments:

A. C. Huff: A Brief Biography 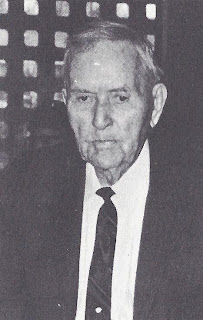 The first full-time preacher for the Church of Christ in Altus, Oklahoma was A. C. Huff. By the time he arrived in Altus in 1907, he was forty-three years old and brought with him over twenty years of preaching experience. The congregation paid him $60 a month, which was roughly equivalent to $1550 by 2013 standards.

A.C. Huff was born in 1864 in Halletsville, Texas, a little town in Lavaca County, about halfway between Houston and San Antonio. His mother died when he was just three years old. As tragic and sad as that was, the little boy was fortunate in that he had four older sisters who mothered him.

Growing up during those difficult years just after the Civil War, he had very few opportunities to receive any formal education. At the outbreak of the War, many schools across the South closed. It was years later before public schools were common. However, when he was sixteen he was able to attend school regularly for a time at Brownwood, Texas.

We know very little about the religious background of his family. We do know that he was baptized into Christ by W. E. Hawkins in 1882, and that he began preaching two years later, when he was twenty years old.

From that time on, for over 80 years, A. C. Huff preached the gospel of Christ and taught the truth of the Bible! He lived from 1864 to 1967--from Civil War to Civil Rights--and died at the age of 103. If he had lived two more months, he would have turned 104. During those 80-plus years of ministry, he was instrumental in planting congregations at Tucumcari and Raton, New Mexico; at Vega, Dodson, and Bronte, Texas; and at Lacey Chapel, Oklahoma. He preached in countless places, engaged in four religious debates that we know of, fathered twelve children, and delivered a 40-minute sermon on the day he turned 101.

Apparently, he spent less than a year in Altus. Our best records indicate that he worked with the church there in 1907, and with the church in Hollis, Oklahoma in 1910. It is a testimony to his preaching in Altus that since those days, there have only been a few short times when the Church of Christ did not support a regular preacher.

A. C. Huff passed from this life on December 8, 1967 in Del City, Oklahoma. The next morning, John R. Stewart conducted his funeral there and accompanied the casket to McLean, Texas, where a memorial service was held at 3 p.m., and where the old preacher lies buried until the resurrection.

Burns, Thelma. "Church History: Church of Christ, Altus, Oklahoma 1898-1980." Unpublished document, 1980. The best written source for the broad sweep of the history of the Hudson and Elm congregation.

Hall, W. Claude, "Congregational Growth and Expansion: Altus, Oklahoma," Firm Foundation September 13, 1927. An indispensable source for the early history of what was at that time the only congregation of the Church of Christ in Altus. Includes photos.

Stewart, John R. "Huff, A. C.," Gospel Advocate January 11, 1968. Huff's obituary, written shortly after his death by the man who conducted his funeral.

Wilhite, J. Porter. The Trail Blazers: Heroes of the Faith. Shreveport, LA: Lambert Book House, 1965. Includes a brief biography of Huff and the notes for one of his sermons.

Wilson, Linda D. Encyclopedia of Oklahoma History & Culture, s.v. "Schools, Subscription." http://digital.library.okstate.edu/encyclopedia/entries/S/SC005.html (accessed January 30, 2013). I found this article helpful for understanding a reference to the little formal education that A. C. Huff received at a "subscription school."
Posted by Frank Bellizzi at 7:05 AM No comments: