On April 17, 1771, Ezra Stiles, then pastor of the Second Congregational Church of Newport, Rhode Island, wrote in his diary about something he had recently seen in the newspapers:

that lately died at Danbury in Connecticutt [sic] Mr Robert Sandeman Founder of the Sect of Sandemanians. He came from Scotland into New Engld Autumn 1764. then about aet. 47. as he then told me.

Stiles (portrait below) would go on to serve as President of Yale College from 1778 until his death in 1795. An influential church leader during his day, he met Sandeman when the Scotsman just arrived in America, landing at Boston in 1764. Even before that time, Stiles and several of his fellow Congregationalist pastors had taken a wary interest in Sandeman and the independent Christian group of which he was the leading light. 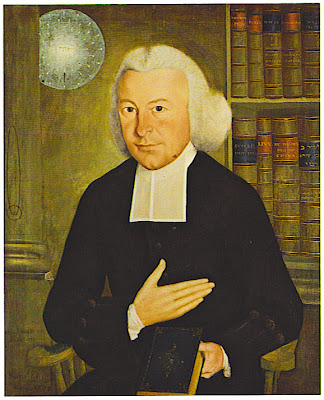 It's hardly a stretch to say that Stiles, as many other great men like his friend Benjamin Franklin, was interested in just about everything. But not everything captured his attention as did the life and times and demise of Sandeman. From the diary entry for August 5, 1772:

"A Monument has been cut in this Town by Mr. Henry Christian Geyer, Stone cutter at the South End, to be sent to Connecticutt: it is executed on the composit Order with twisted Pillars, and the other proper Ornaments, having a Cherub's Head on Wings, and the following Label from his Mouth Rev. xiv 6, 7. --On the Tomb-stone is this Inscription.


Here lies
Until the Resurrection
The Body of
ROBERT SANDEMAN
A Native of Perth, North Britain,
who in the face of continual Opposition
From all Sorts of Men
Long and boldly contended
For the ancient Faith:
That the bare work of JESUS CHRIST,
without a Deed, or Thought, on the part of Man,
Is sufficient to present
The chief of Sinners
Spotless before God:
To declare this blessed Truth
As testified in the holy Scriptures
He left his Country--he left his Friends,
And after much patient Suffering
Finished his Labors
At DANBURY
2d April 1771,
aged 53 years.


Deigned Christ come so nigh to us
As not to count it shame
To call us Brethren--shall we blush
At aught that bears his Name.
Nay let us boast in his Reproach
And glory in his Cross,
When he appears, one smile from him
Shall far o'erpay our Loss." 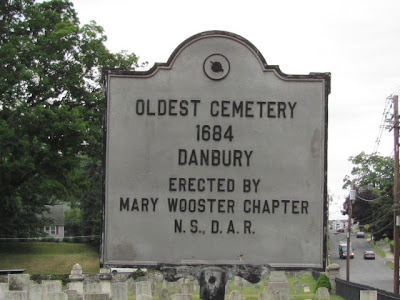 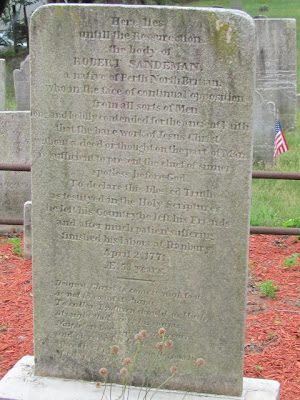 The April 3, 1826 issue of The Christian Baptist includes an exchange between a semi-anonymous writer and the editor, Alexander Campbell. The initial letter, says Campbell, was written by one of the most worthy bishops in Virginia; whose standing in the learned world obtained for him the honorary degree of D. D. and whose piety and intelligence refused the title as a badge of popery. That, along with the signature R. B. S., leads to the conclusion that the letter's author was none other than Robert B. Semple, one of the great leaders among the Baptists in Virginia at the time.

In his letter, Semple offers a number of compliments to Campbell as a preacher and writer. He also lists a few thoughtful and well-worded criticisms. Campbell then responds to Semple's letter. Among the points that Campbell takes up is the assertion that he is basically a Haldanian or Sandemanian, i.e. that he is a follower of the brothers Robert and James Haldane; or yet another church reformer from Scotland, Robert Sandeman. In his reply, Campbell acknowledges that he has learned from an array of writers, including the likes of the Haldanes and Sandeman, Luther and Calvin and Wesley. But, he adds, I do not believe that any one of them had clear and consistent views of the Christian religion as a whole.

Campbell says more about Sandeman. He explains that many years before he had taken up a special project. He explored the question of rational versus experiential conversion: When a person initially comes to Christ, which one is prior, the mind or the heart? Campbell admits that at the beginning of his studies, he was prejudiced against Robert Sandeman, the champion of rational religion. Instead, he had favored James Hervey, whose popular book Dialogues between Theron and Aspasio breathes the warm spirit of the revivalism of his day. Campbell mentions that, with the Bible nearby, he studied many authors, including Hervey, Marshall, Bellamy, Glass, and Cudworth. But as he went along, he discovered Sandeman to be like a giant among dwarfs . . . like Sampson with the gates and posts of Gaza on his shoulders (228).


So who was Robert Sandeman? And why did he so impress the likes of Stiles and Campbell? More to come in future posts.
Posted by Frank Bellizzi at 7:20 AM 3 comments: 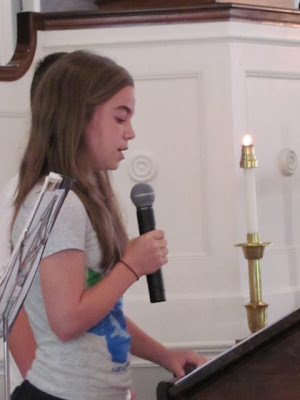 Abigail was one of the readers during "Children's Sunday" this week at the Rocky Hill Congregational Church. She did a great job. 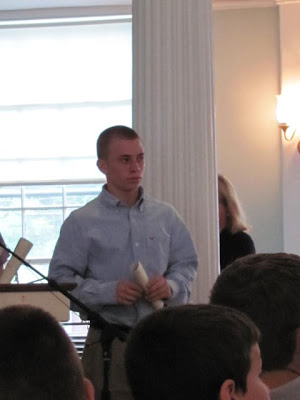 Benjamin was one of the seniors recognized that morning.

On Monday, Chloe and I had lunch at Bangkok Gardens in New Haven. Aubrey and Ben don't like exotic Asian food (!), and went for pizza slices instead. 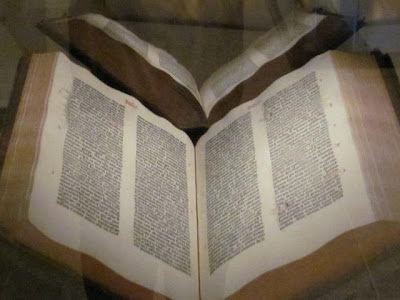 Later that afternoon, I took Ben to see the Beinecke Rare Book and Manuscript Library. It houses, among other things, Yale's copy of the Gutenburg Bible, printed in 1455. The book in the background isn't a reflection. It's the other of the two volumes.
Posted by Frank Bellizzi at 6:25 PM 1 comment:

Sunday night after church, on the 66th anniversary of D-Day, I had my picture taken with one of my heroes, Roy Kiser.

Born and raised in the Texas Panhandle, Roy grew up at McLean and finished high school at Groom in 1938. He married in June of 1941. In December of that year, when he and his wife heard about the attack on Pearl Harbor, he knew that his life would soon change. He was drafted into the U.S. Army in September 1943 and immediately went to Camp Fannin, Texas, for seventeen weeks of basic training.

By the Spring of 1944, we was on a ship leaving New York Harbor, zig-zagging to avoid the fire of German submarines just off the U.S. coast. After a 22-day trip across the Atlantic, his group of infantry replacements camped on a high hill in England, taking what he called "a lot of physical training." Later, when he was double-timing behind a tank, he was thankful that his drill sergeants were so hard on the soldiers.

On the afternoon of June 6, 1944, he was a part of a group that landed on Utah Beach, Normandy, France, taking fire. Just a few days after the landing, he was promoted from private to sergeant because of his de facto leadership of an outfit that was moving across the French countryside, one hedgerow after another. A few weeks after D-Day, a huge artillery shell nearly ended his life. After the blast, he walked back to the medic's tent, with blood streaming from his ears and nose, and passed out. Days later, he woke up in a hospital back in England, where he was awarded the Purple Heart.

Years later, when he was working in the meat-packing business in Tulsa, Oklahoma, Roy became one of the elders of the Garnett Road Church of Christ. He says that of all the things he's ever done, he's proudest of the annual Tulsa Soul-Winning Workshop, conducted by the Garnett Road Church. He and his fellow elders constantly received letters reporting baptisms, mission efforts, and new congregations that could be traced back to the Workshop.
Posted by Frank Bellizzi at 5:45 PM 2 comments: