Carlo Ginzburg's The Cheese and the Worms: The Religion of 16th-Century Radical Rednecks 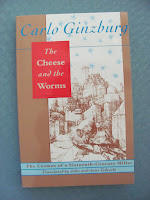 Ginzburg, Carlo. The Cheese and the Worms: The Cosmos of a Sixteenth-Century Miller. Translated by John and Anne Tedeschi. Baltimore: Johns Hopkins University Press, 1980.


Take a look at any list of classic studies in Renaissance and Reformation Europe and you're bound to see this title. First published in Italian in 1976, Ginzburg's The Cheese and the Worms would also make any list of classic microhistories. It's that significant.

So then, what's this book all about and why is it so popular? Start with the main character, the "sixteenth-century miller" of the subtitle. Domenico Scandella, commonly known by his nickname, Menocchio, was born in 1532 in a small town in a region of far northeastern Italy called the Friuli. One of the most basic things we know about him is that although he seems to have been well-liked by many of his contemporaries, he spent a lot of his time spewing religious heresy. He would argue theology anytime with anyone, including (and maybe especially) priests. So, Carlo Ginzburg raises the obvious question: what were the sources of his unorthodox ideas? Was he a Lutheran? An Anabaptist? Or what?

It's strange. Although Menocchio said any number of things that might seem to point in the direction of Lutheranism or especially Anabaptism, other things he said clearly show that no self-respecting Lutheran or Anabaptist would have acknowledged him as a brother in the faith. As an alternative to those theories, Ginzburg posits that the coming of the Reformation to Menocchio's world had opened up the way for an ancient peasant radicalism to bubble up to the surface. And that's what he espoused.

As you might guess, Menocchio's heresies combined with his big mouth and combativeness got him into trouble with the religious authorities of the day. His first appearance before inquisitors came in 1584, the year he turned 52. The reason we know as much about him as we do is because the record of his interrogations has survived. And it was here that he revealed his heresy for posterity, including the part about the cheese and the worms:

I have said that, in my opinion, all was chaos, that is, earth, air, water, and fire were mixed together; and out of that bulk a mass formed--just as cheese is made out of milk--and worms appeared in it, and these were the angels. The most holy majesty decreed that these should be God and the angels, and among that number of angels, there was also God, he too having been created out of that mass at the same time, and he was made lord, . . . (5-6).

Menocchio's opinion was that religion is a racket. Relics, images, the Atonement, and all of the sacraments, especially baptism and confirmation, were invented by priests and monks in order to keep the church in business. And the pope is no more than a man. God loves all people and, regardless of the religion they subscribe to, all of them can be saved in the same way: by loving one's neighbor.

So where does this come from? Again, Ginzburg argues that neither Lutheranism nor Anabaptist doctrine seem to be at the root of the strange miller's worldview:

Provisionally, it's best to attribute [Menocchio's ideas] to a substratum of peasant beliefs perhaps centuries old, that were never wholly wiped out. . . . On the basis of this hypothesis, then, Mennochio's radical statements will not be explained by tracing them to Anabaptism or, worse yet, to a generic 'Lutheranism.' Rather, we should ask if they don't belong within the autonomous current of peasant radicalism, which the upheaval of the Reformation had helped to bring forth, but which was much older (21).

But what about Menocchio's books? It just so happened that he was quite literate, and that he owned and borrowed any number of books. Did he cobble his heresy together from them? In response to this question, Ginzburg is at pains to show that, although the miller was an avid reader for many years, he did not derive his ideas from books. It is much closer to the mark to say that he filtered all of his reading through the aforementioned "peasant radicalism" that Menocchio inherited by way of "oral tradition" (32-33).

The bulk of Ginzburg's work goes on in this way, revealing how Menocchio, in his interrogations, showed himself to be something other than a Lutheran, an Anabaptist, a dualistic Manichean, or a universalist follower of ancient church father Origen (the latter two types being what his inquisitors sometimes imagined he was). Eventually, he convinced his judges that not only was he a heretic, but a dangerous one at that. The Church had to protect innocent, ignorant people from a menace like him. They sentenced him to be compelled to reenter the Church, publicly forsake his heresies, fulfill penances, wear a penitential garment, and spend the rest of his life in prison at his children's expense (93).

After two terrible years in prison, Menocchio had had enough. With the help of a lawyer, apparently, he composed a letter begging for forgiveness and release. His request was granted, but he was confined to his village for life, and a friend had to act as a sort of bondsman who would guarantee the heretic's whereabouts and good behavior.

In time, Menocchio renewed his life in the community. He was back to work, and even held an official local position. But it seems he couldn't help himself. Soon, he was also back to his old tricks, talking with all sorts of people to whom he expressed his unorthodox, heretical views. According to reports, the same kinds of discussions he had with a man named Lunardo he also had with a Jew named Simon who stayed for a while at Mennochio's house. Clearly, he had not given up his old ideas. Nor had those two years in prison scared him into silence, at least now that he was out. As fate would have it, word made its way to the inquisitors, who had him arrested and confined in the prison at Aviano in June 1599 (103). By this point, he was 67 years old. His wife and his only devoted son had died. He was more or less without defense or help.

But was his a singular case? Ginzburg answers that it wasn't. There was, for example, a "rustic in the Lucchese countryside who hid behind the pseudonym Scolio." Like our main character, Scolio "projected onto the written page, elements taken from oral tradition" (112). For example, much like Menocchio, he was convinced that Judaism, Islam, and Christianity all preached some version of the Ten Commandments. Something else that the two men shared was "a common store of traditions, myths, and aspirations handed down orally over generations" (117).

Next, Ginzburg introduces yet another peasant radical, Pighino ("the fat one"), also a miller. The author notes that sixteenth-century millers had, at best, mixed reputations. And they were well known for their radicalism. Dealing with a wide variety of people, they worked in out-of-the-way places, where folks would freely exchange ideas much as they would at "the inn and the shop" (119). These were the places where the cultures of "peasant religious radicalism" and of "peasant egalitarianism" were kept alive (123). Consequently, we should reject any assumption that "ideas originate exclusively among the dominant classes." What is required of historians is a "more complicated hypothesis about relationships in this period between the culture of the dominant classes and the culture of the subordinate classes" (126). This, as I see it, represents the most significant contribution that Ginzburg's work offers to the historiography.

Oh, and what became of Menocchio, our backsliding heretic? I've given you enough to this point. You'll have to get the book and find out.

Posted by Frank Bellizzi at 6:00 PM No comments: