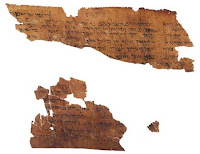 The Hebrew title of the book is Qohelet, another word that isn't easy to figure out.

But as Gordis himself knew, it isn't quite so hopeless as that. Qohelet comes from the Hebrew root qahal, a word that involves the idea of collecting or gathering. When used as a verb in the Scriptures, qahal always means "to gather people." So Qohelet is someone who assembles a crowd, or gathers an audience, presumably to speak to them.

Along this line, the ancient Greek translation of the Scriptures, the Septuagint, came up with a title that's connected to the word for "an assembly." From the Greek ecclesia (assembly) it's a short step to ecclesiastes (the assemblyman).

When translating the Latin Vulgate, Jerome used an expression that emphasized the idea of someone speaking to the assembly. Jerome's idea was an interpretation, one that's probably right.

If this view of the title is correct, then Qohelet is the description of a wise man, a sage who has spent many years looking at life. And now as he writes, it's as though he has gathered his friends and colleagues in order to speak to them, to talk about his observations, and announce his conclusion.

Martin Luther took this view and called the Book of Ecclesiastes der Prediger: The Preacher. Qohelet might be a preacher of sorts. But he's got to be one of the most unconventional preachers ever.

I want to write some more about this book. In the meantime, I'd be interested to hear your take. What are some of your observations about the Book of Ecclesiastes?
Posted by Frank Bellizzi at 4:35 AM

I have absolutely no idea how that happened, Keith. Blogger demons, I suspect.

Anyway, I didn't mean for there to be any link there, and don't know why two words were in yellow text. It's fixed now (I think).

Well, my first observation would be that Ecclesiastes is a dangerous book to quote.

I'm not sure it's safe to assume that the Teacher is parroting God's wisdom in every verse. If ever there was a book that needed to be clearly marked "says the Teacher," and heavy doses of "I thought" and "I declared," it's this one. Fortunately, it is clearly marked. Unfortunately, not everyone who quotes it seems to be aware of that!